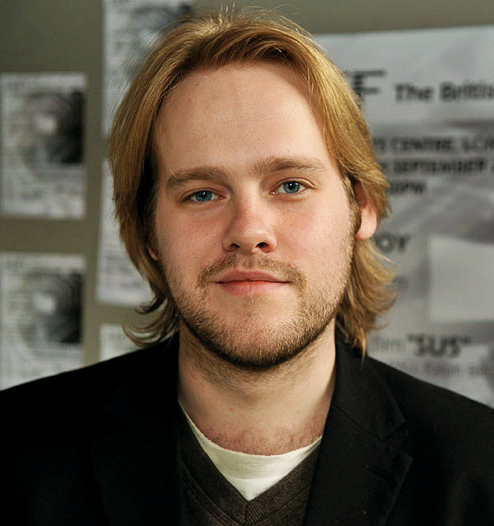 This month’s edition is guest-written by David Trumble, director of ‘The Shift’, one of this year’s BUFF UK Shorts…

BLOG BEGINS: I have never guest-written for a blog before, so one thing you should know about me right off the bat: I ramble. Emmanuel very kindly asked me if I could write up my impressions of this year’s British Urban Film Festival, and I was only too happy to. This is the first film festival my short film The Shift has been selected for, and I can’t think of a better place to make our debut, the home of the passionate, the hard-working, the uncompromising, the different. And our entry, the tale of a cantankerous, flame-haired ambulance technician called Damon, was certainly different. We’re currently preparing to attend our third festival with “The Shift” in November, but my experience of BUFF still remains the fondest, because of the atmosphere created by it’s organizers. This was an environment that encouraged interaction between it’s film-makers, conversation, debate, laughter and a looser, more intimate style of doing things. We were not simply watching films in a darkened room, the floor was opened up. This blog may be a little scattershot, because that was how I experienced BUFF, a stream of thoughts and ideas that still come back to me now. A lot of silent “wows” to myself. Wow, that shot of the henchmen pulling out their badges in Adventures of a Supernigger blew me away, Wow, it’s Saskia Reeves from Luther and she THINKS she’s met me before, Wow, that poetry was lovely, Wow, Ralph Brown’s a legend, Wow, I would not in a million years be able to pull off the suit Lateef Lovejoy was wearing….And wait a minute. The tickets are FREE, you say????

At a time where our government no longer even PRETENDS to value the film industry, festivals like BUFF stand resilient and continue to cultivate and encourage new talent. And in the case of this lowly film-maker, it also provided some hot food and a place to sleep! A little bit of context first…Leave it to a guy with a dozen trusted friends in London to show up on the weekend that they are all off working on another short film and unable to let me crash. Worse than that, my trusted lead actor Greg Lock, who originated Damon’s story with me and would have been at BUFF with bells on, was in the middle of a gruelling sponsored walk from Fort William to Inverness to raise money for the London Air Ambulance, and so was also a no-go. Curse you, Greg and your altruism! So when I arrived on the Saturday, I was pretty sure that some kind of Travelodge or B & B was on the cards, and as I resigned myself to that fate, BUFF came to my rescue!There I was on the Saturday night, after the screening of “SUS” (Excellent) finding myself sat in the BUFF main office talking into the wee hours with Emmanuel and Bernard, eating take-away courtesy of Emmanuel, laughing a lot, and discussing everything and anything. Dinner and a show indeed, the full BUFF treatment. Although the less said about our impromptu viewing of the first ten minutes of Shortbus the better.I’m not sure, but i think it was halfway through our conversation we discussed who would make a good black Doctor Who (My vote: Adrian Lester, the man doesn’t age!) that I realized something about Emmanuel and all the people who made BUFF a reality: This is not a job to them. It’s all for the love of it.

It reminded me of the actors and crew who turned up to make The Shift for free, the members of the Oxfordshire Community Foundation who took a chance on our film to open their charity premiere, the kind people at TLO Film Studios who gave us a subsidised price for the ambulance, my legendary editor Zack who let me sleep on his bedroom floor for a fortnight during post production…Making films is very counter-intuitive, and to an outsider who doesn’t get it the whole process seems like an unfair deal. Give your all and get only a little back, if at all. Pulling together an independent short is an uphill struggle for a young director, requiring no end of personality flaws and obsessions. It all appears very masochistic, and…okay, I can’t lie, it is very masochistic. It’s kind of like being the child who jumps into the water in his clothes and then keeps doing it no matter how many times he is told not to. And every time you do your parents despair and cry “WHY WOULD YOU DO THAT AGAIN? YOU ONLY JUST GOT DRY!” Will we ever learn? Well…of course not. At least that’s the way I see it. You have to love film to keep making it, and your crew have to love you to make it with you, if you don’t get something out of it then you’re not going to last. The secret those-who-don’t-get-it miss: We’re most unhappy when we’ve dried off, the moment we’re back to normal again we can’t wait to jump back into the water. We hate being dry, being dry sucks.

The joy of watching the BUFF Shorts was not only seeing that level of insanity and dedication in the films I watched, but also in the faces of the film-makers I met there. Three names worthy of special praise were the guys I shared the Q & A with, Rohan Green (dir. Physical Education, loved the steadicam shots and well-judged score) Tarun Thind (Dir. English, gorgeous tracking shots and compositions, a great eye) and Mawaan Rizwan (dir. Paperboy, endearing and less-is-more to perfect effect). I spent a relatively short time speaking to them each in person, but it was a flurry of back and forths, which Canon did you use, where did you film that, can I get your actor’s details, what’s your favourite lens? (For anyone who cares, mine’s the 50mm!) Best thing of all was that never once did I feel like I had to ask them WHY they wanted to direct, why they were making these films. It was just obvious and unspoken, why WOULDN’T we? I love that mentality, and why should we have to explain it? In fact, that’s what was so interesting about the Q & A. It was anything but a stinted question and answer session, there wasn’t a divide between us and the audience, we were just people talking and sharing. I found myself very moved by a very emotional question about the race representation of the black bully in Physical Education, which allowed not only the film-makers but also other members of the audience to get in on the debate and give their personal views. That was pretty special.

So where to next? For the British Urban Film Festival, another year, their sixth, and for me, a music video in Oxford, plus a new short film that was actually devised within the walls of BUFF itself! “Sofa”, a short film that will be written, directed and performed by collaborators Liam Dempsey, Matt Brothers, and myself, was devised whilst waiting to go into the screening room for the BUFF shorts, as the three of us were sitting on, yes wait for it, a sofa. Inspiration can come from anywhere, and at BUFF, sometimes you’re sitting on it.

The British Film Industry is not dead, despite what people may have you believe. Film can never really be killed in this country, we have too much passion and drive for it. The loss of the UK Film Council is a blow, like our fragile economy we’re in a tailspin, but like economies, this is a cyclical thing. The difference between now and the last British New Wave is that the methods of film-making are getting cheaper all the time, a young film-maker can pick up a digital stills camera and make something that looks stunning, the internet allows for maximum exposure at minimum cost, creativity is now overwhelmingly interactive, people can become their own studios, their own marketers.

Watch the BUFF online shorts and see the many walks of life their directors and subjects come from. This is an exciting era for those who are just beginning, the landscape is rapidly evolving. For those who want it badly enough, the opportunities are there. But all of that hard work, all that begging, borrowing and stealing needs to find it’s audience, which is where the major road-blocks are being thrown up. The problems this country is facing certainly do not help make a competitive market any easier to break into, but then…that’s why places like BUFF are so very important. You could be a graduate, an award winner, a first-time director, but if you have something to say then there are people who want to listen.

As I looked alongside the other film-makers I was sitting shoulder to shoulder with, I realized we were all from very different backgrounds, and had each come to this moment by different ways, which ultimately gave me hope when it was my turn to answer the question (in characteristic rambling form) of how I feel about the state of film-making in this country. There really is no one way to make it. If one avenue closes, you find another one. The one thing you don’t do is stop.

So to all film-makers, film-lovers, or anyone who wants to see British film-making alive and well in 2011, I say to you…Come forward, if you think you’re BUFF enough!